He was one of the very nicest people that I’ve ever come to know and he was my boss for a brief period of time around 2003. He practiced public accounting and the dynamic between the two of us was mutual respect. Upon helping him through one tax season, I pursued another opportunity which helped paved the way to establishing my own practice.

Al should have been winding up his practice right around the time I had come on board. However; it’s clear that his clients and the game of golf were preeminent interests which weren’t going to go away. We had lost touch between my tenure and his passing but I can only imagine that he had a tremendous home life with loving people around him. Evidence of his high intellect is referenced from his obituary listing his university graduation at the age of 19 from our common alma mater, the U of A.

Upon reflecting this morning of one particular collaborative effort on a file with Al, I just had to draft a blog post in remembrance of him. He was one of many fine folk instrumental in assisting me with the street level application of tax accounting.  Al was one of those people who knew exactly how to treat people respectfully. He was a soft spoken big man who carried clout through his unspoken word.

It’s no secret that this was a vibrant period in modern music. A sampling -many of which had lesser popular appeal.

You may have read the story. Word is that close to 20 civil servants in B.C. have been fired in the context of voicing concerns over public spending. Imagine that. Results from an investigation proceeded and ultimately two individuals were escorted from the legislature.

Let’s think this through:

We all know that Canadians are over taxed with a top marginal rate in Alberta of 49 per cent income tax.  Yes, that’s just income tax and doesn’t include excise taxes, property taxes, or GST.  In fact, many of your fellow citizens of high net worth leave the maple leaf behind for residence elsewhere due to the excess of Canadian tax.

Now let’s consider our politicians who have done absolutely zilch in decades to materially reduce the personal income tax burden. It hasn’t mattered their stripe because once any politician has achieved office – the best interests of taxpayers have been lost amidst the expanse of bureaucratic largesse. Ralph Klein in Alberta is one noted exception who took on public sector unions and saved the public purse from calamity. Unfortunately, his legacy has been undone.

How about the receptivity of public officials to your discontentment with the tax burden? It obviously hasn’t translated. For bureaucrats as evidenced by this sequence of events in the B.C. legislature to be  negligent with the treatment of sacred tax dollars to the extent that they would  enact measures of self protection of their behavior through non-disclosure agreements should in my estimation be equivalent to fraud and corruption. Yes, corruption in Canada.   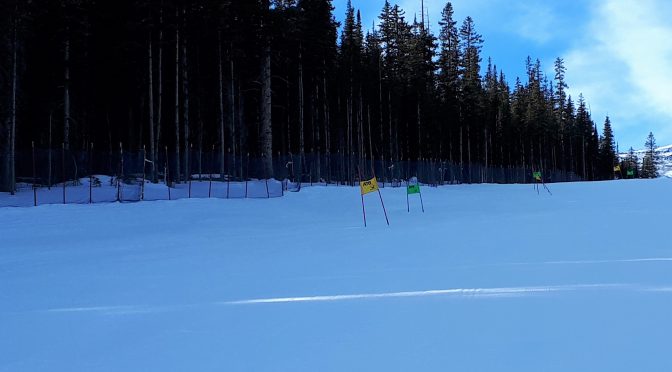 The things I like about Nakiska are mountainous scenes, guaranteed snow (snow making), unrushed morning travel, friendly feel, and affordability.  I’m grateful to be back on some boards that give me better manoeuvrability in the bumps having had my old Head Monster 88’s lifted at COP last winter and then experiencing lesser performing substitutes.  Speaking of Monsters, the Monster Glades is where I tested these refurbished K2 Axis skis yesterday (snap enclosed) given that other bump runs were in quite poor shape.  These skis were acquired thanks to the empathy of ski friend OB having learned of my COP misfortune. Thanks OB!

Not all the kids were absent due to school yesterday (Friday). Canada games trials were taking place for slalom enthusiasts. No, this was not the course they were on (snap) but surprisingly this had been set up on Lower Mapmaker for training. Yes, I veered off course for the photographic moment.

I’m establishing a nice collection of Nakiska photos given my leisurely annual weekday forays and in fact the experience leads me to think about bringing a tripod along one day to step up the seriousness of capturing the beautiful scenery. A “Go Pro” for my helmut perhaps. Stay tuned.  I’m reminded of the esteemed Warren Miller who with his team had taken phenomenal footage of ski terrain throughout the world and inspired youth to take up the sport.