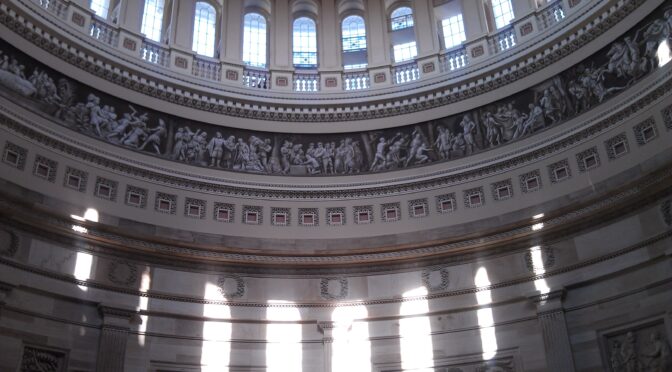 In the fall of 2013, yours truly was in Washington D.C. and was surprised to get in for a tour of the Capitol building in lieu of a government shut-down at the time. I was standing across the fountain and thought….why not just ask around to see if the tours are still on. I was in luck. I strolled around the back (photo) and entered. There was no line up because everyone else may have been also presuming that tours were off because of the shut down.

I was certainly impressed by the architecture. We were seated in a min-theatre to watch a movie of the construction. There was the “rotunda” which is a picturesque dome of immaculate design and within the circular landing the perimeter is decorated in statues of historic political figures. Although, the House of Representatives was not sitting, the guide still offered us an opportunity to sit in the gallery to stare at the emptiness. I took her up on the offer unlike most of who declined. This required an extra security measure. I had thoughts of my mother (school teacher) who put much attention on things of civility and justice. You’ve all seen the exterior in pictures. Much work has been put into restoring the exterior in recent years. I came away thinking that much care had been placed in developing this material beacon of democracy unlike the care recently displayed by protagonists within its halls to serve its purpose.

So….as I watched the course of events on ABC news yesterday when Trump loyalist stormed the Capitol building, I was obviously dismayed. I wasn’t outraged because I admit to having grown somewhat impervious to incidents tied to Trump. Even my shock regarding friends / acquaintances support of Trump over the years is wearing off. Is there a final chapter of irony to the Trump debacle to be played out via impeachment at the last hour when Republicans couldn’t bring themselves to vote their conscience on impeachment during the first go ‘round. It will be interesting to see.

Trump should be everything that America should not stand for and he became their President. It’s embarrassing to have watched this fiasco unfold. Those idiots who stormed the capitol will still be snivelling about how in their minds life has cheated them and potentially how to execute their next pathetic display of victimhood.